Why are we taking hydrogen offshore?

Exclusive interview with skipper Phil Sharp, who discusses why OceansLab will be using a pioneering hydrogen-electric system to replace a diesel generator. 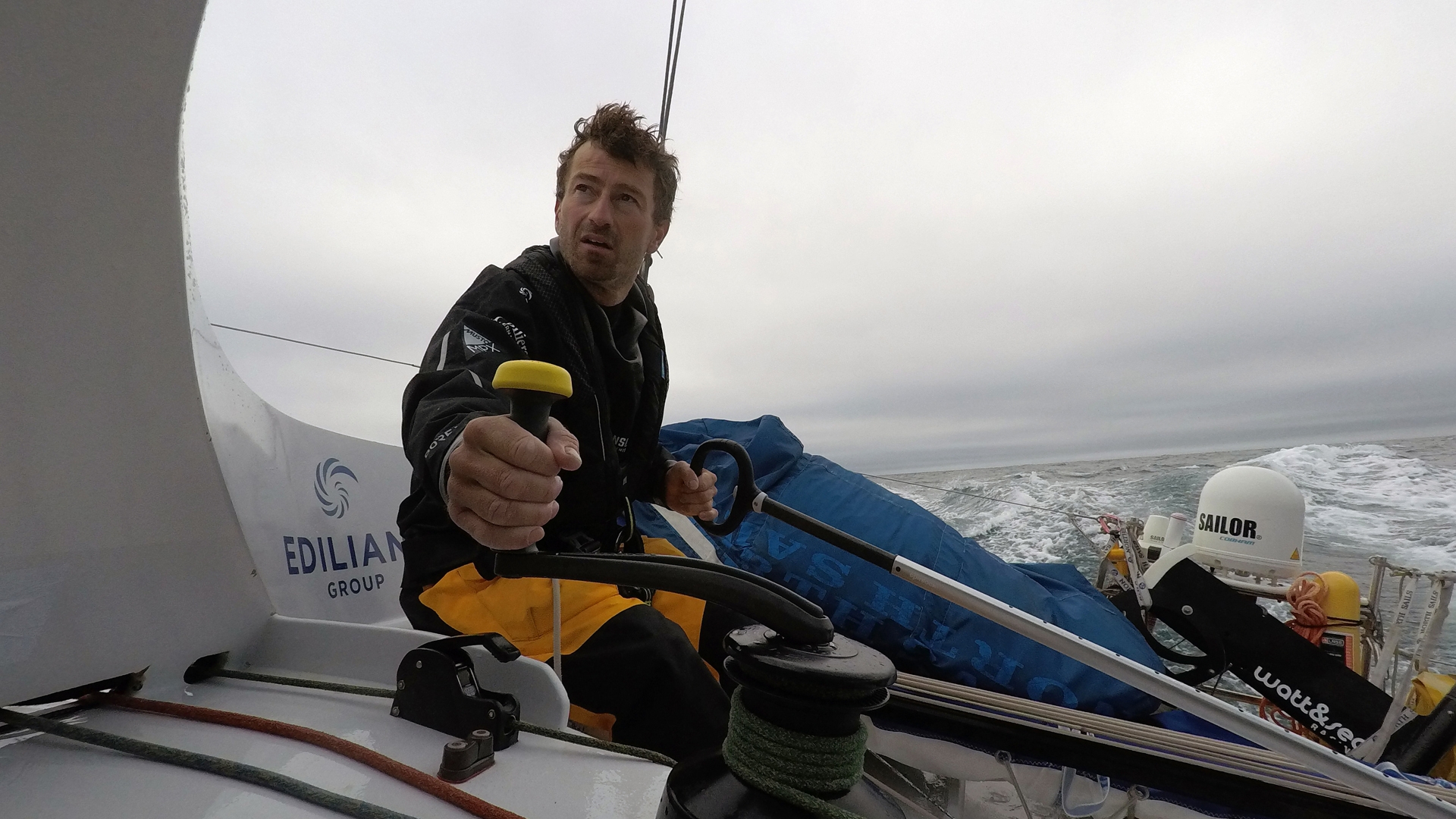 Phil, how does the fuel cell on the boat produce energy?

A fuel cell works through the positive reaction of oxygen in the air with hydrogen. That chemical reaction produces electricity.

Where does the hydrogen come from?

The hydrogen we will use is referred to as green hydrogen as it is made from renewable electricity through the electrolysis of water. It is then compressed and transferred to the boat where it is stored in composite cylinders.

Is the hydrogen heavy?

So the hydrogen is injected into the fuel cell and there is no harmful atmospheric by-product from this reaction?

Exactly. There are zero emissions. The only by-product is harmless water vapour.

How is the electricity created in the fuel cell stored?

We store it in the batteries. We can also use it to charge the batteries, especially if there has not been much sun to derive power from the boat’s solar panels. If we are using the propulsion system, we feed that electricity from the fuel cell directly to the electric motor on the boat.

How does the electricity created by the fuel cell reach the batteries?

It has to go through a converter to make sure you have the right voltage to enter the batteries.

Can big shipping companies use a scaled up version of this system?

Yes. Fuel cells are going to be a big thing in shipping because they are more than twice as efficient as traditional combustion engines and they produce clean energy which is critical for the health of our planet. In order to meet climate change targets the shipping industry must reach full decarbonisation by 2050 and scalable prototypes like ours will be critical to accelerate uptake if we are to meet these targets.

Could you drive a container ship with a fuel cell?

Yes. You use large scale cells which work on exactly the same reaction principle.

What amount of power will your onboard fuel cell produce?

It will have a maximum power of around 10 Kilowatts – necessary for propelling our Class 40 along at a comfortable 6-7 knots.

Is there any difference between the system you will put into the Class 40 for your race programme in 2020 with what you would install in an IMOCA?

The IMOCA system will be a development of the Class 40 system, will be slightly more powerful at 15kW, and will also be a commercial prototype in the form of a plug and play power pack.

Is the engine on your boat a specially modified unit that only operates under battery power?

It’s an electric motor that needs DC current so it can also run directly off the fuel cell as well as the batteries which are mounted in parallel.

Does that mean your engine is very quiet on the boat?

What’s the biggest thing that could go wrong with a fuel cell when you are offshore?

The one thing that is quite unknown is whether they can deal with a salty environment. The air on the ocean is quite humid and contains salt, so the filtration of it is important. We are designing a filtration system that will hopefully stand up to that. This system will be monitored to assess any degradation and to see how that varies with time.

Is hydrogen a tricky gas to use?

Well, you are dealing with high pressure gas so the system needs to reach certain safety standards and be leak proof and tested. These have already been defined, met and commercialized for the automotive sector.

Is there a way of detecting if hydrogen escapes?

Yes, we will have hydrogen sensors on the boat. If they detect a leak they will automatically close the valves on the cylinders to prevent any further seepage.

Yes, it is highly combustible just like cooking gas that almost every boat has on board. In fact it burns very cleanly and the flame is almost invisible. It is so light that, in the air, it rises rather than sinks. So if you do have a leak it is very likely to go up and escape out of any open hatch and not sink into the bilges, like cooking gas.

So you are happy with the safety aspects of the system?

Yes, once it is safety-certified then I will feel very confident about using it.

What about a capsize or the boat hitting something hard in the water?

Well, this technology is the same as used in the automotive sector so it has to meet rigorous crash testing procedures and the tanks have to have sufficient certification to withstand big impacts.

Was any of this technology installed on board Imerys Clean Energy when you raced her in 2018?

No. We had a conventional diesel engine onboard that we ran with biodiesel, but now we have replaced this with a full electric system to complement the renewable energy captured through solar PV and a hydrogenerator. The fuel cell has been in development and is going through tests. The new system will be integrated into the boat over the winter months.

So by the time you set sail on the Transat in May 2020 you should have all this on board?

This site uses Akismet to reduce spam. Learn how your comment data is processed.

Any cookies that may not be particularly necessary for the website to function and is used specifically to collect user personal data via analytics, ads, other embedded contents are termed as non-necessary cookies. It is mandatory to procure user consent prior to running these cookies on your website.

SAVE & ACCEPT
Go to Top